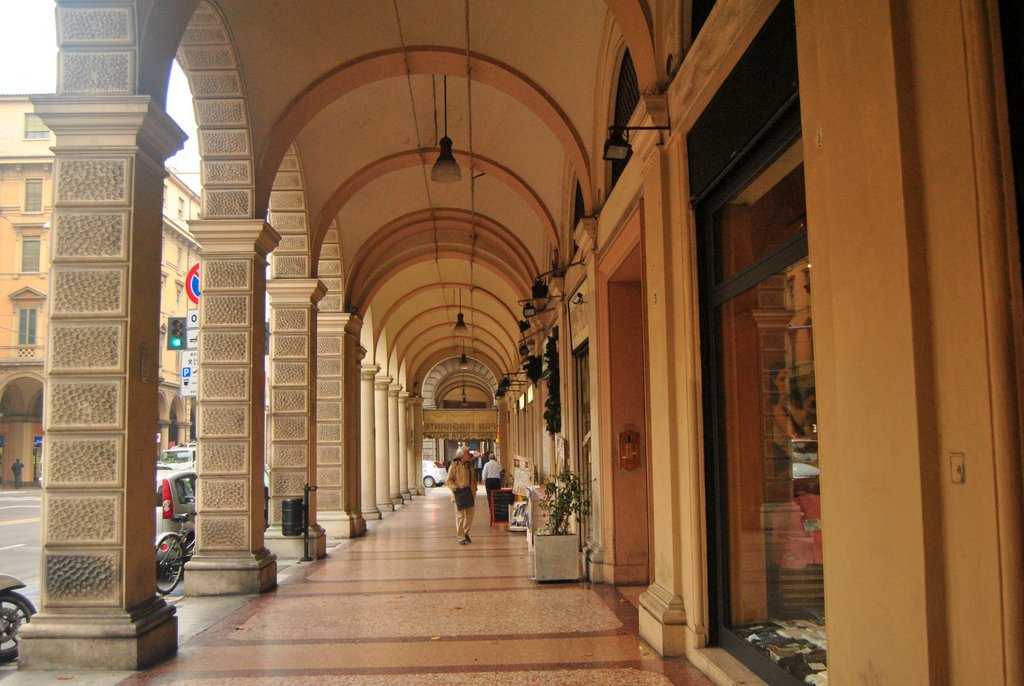 We’re now in France and along the way, spent a lovely week or so sauntering through Italy. This time we decided to try out a different route, along the east coast from Bari in the south.  Our first night was spent in a nice little town called Vasto on the east coast. A night there was perfect recovery from a rather gruelling ferry trip with disturbed sleep by a horde of Russian Orthodox priests and entourage, all talking loudly, who then sat down near us and chomped on sausage and bread which they washed down with vodka – no sleep after that.

Once we found our way into Centro Storico – our usual method of attack in Italian towns – we discovered lots of narrow alleyways with restaurants and bars and interesting little shops – just our cup of tea, or vino rosso!  The ‘old town’ was perched on a hilltop, with lovely views down to the sprawling coastline below. There was the most amazing cloud formation when we arrived – in fact, there are always amazing cloud formation in Italy I find!

At dinner, a simple pasta dish is always what we’re hankering for on our first night in Italy, I was asked if I wanted ‘picante’ with my pasta, which I usually expect to mean hot sauce.  It was a pleasant surprise to be presented with a whole fresh chilli and little pair of scissors!

We stopped for lunch the following day to have a look at the Republic of San Marino. A strange place really – it was shrouded in fog, so perhaps I’m being a bit harsh. It didn’t really seem to have an identity of its own – the souvenir shops (of which there were a lot) seemed to be happy selling all sorts of tat which really didn’t represent much of anything.

Bologna was our next stop. Wow what an amazing city that is. So much Italian grandeur all in one place. Every time we turned a corner, it was wow…. There are beautiful old arched patina-ed porticos absolutely everywhere. I believe there’s 4kms of them.  Most of the buildings are red brick, and those that aren’t, tend to be painted wonderful shades of terracotta, ochre or burnt sienna. Unfortunately on our arrival in Bologna, we’ve met with northern European autumn weather … grey and gray with lashings of fog – atmospheric perhaps?

Then it was down the road to Parma for the next couple of nights. Another lovely town. Smaller than Bologna, and also mostly pedestrianised, except for the cycles which seemed to be everywhere gliding silently around – they needed a bell or two, in my mind.  I never really thought it possible to have a whole (expensive!) meal of Parma ham, and parmesan cheese. Needless to say, and it was wonderful. The parmesan is softish and crumbly, and tastes almost sweet quite unlike the sharp dry stuff we tend to eat normally. It was wonderful to be able to visit the Salumerie and buy great big chunks to bring through to France. 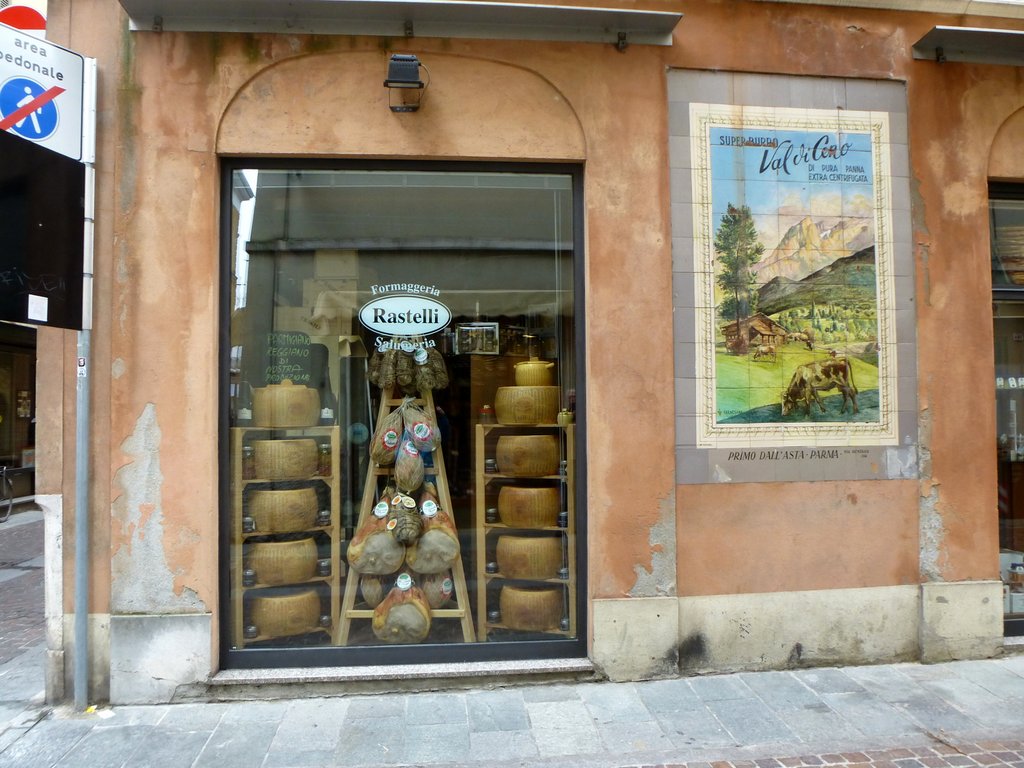 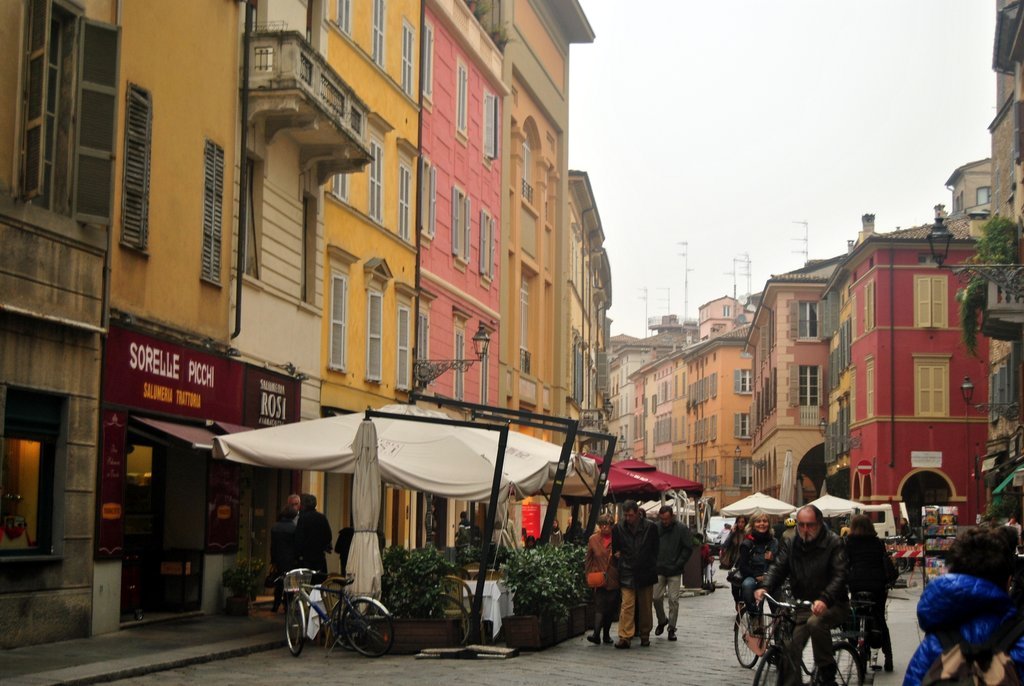 Our last night in Italy was in another interesting little place, one which we’ve whizzed past on the Motorway many times.  Finale Liguire was a great find. It’s one of the towns along the Ligurian Coast so you have to make the effort to leave the motorway and wind down to the old coastal road below. We found a lovely hotel right on the water, and behind it were more laneways with restaurants, shops and cafes – again!  We had our last meal of soup and pasta for a while, and lay in bed listing to the waves – just like being in Koroni! 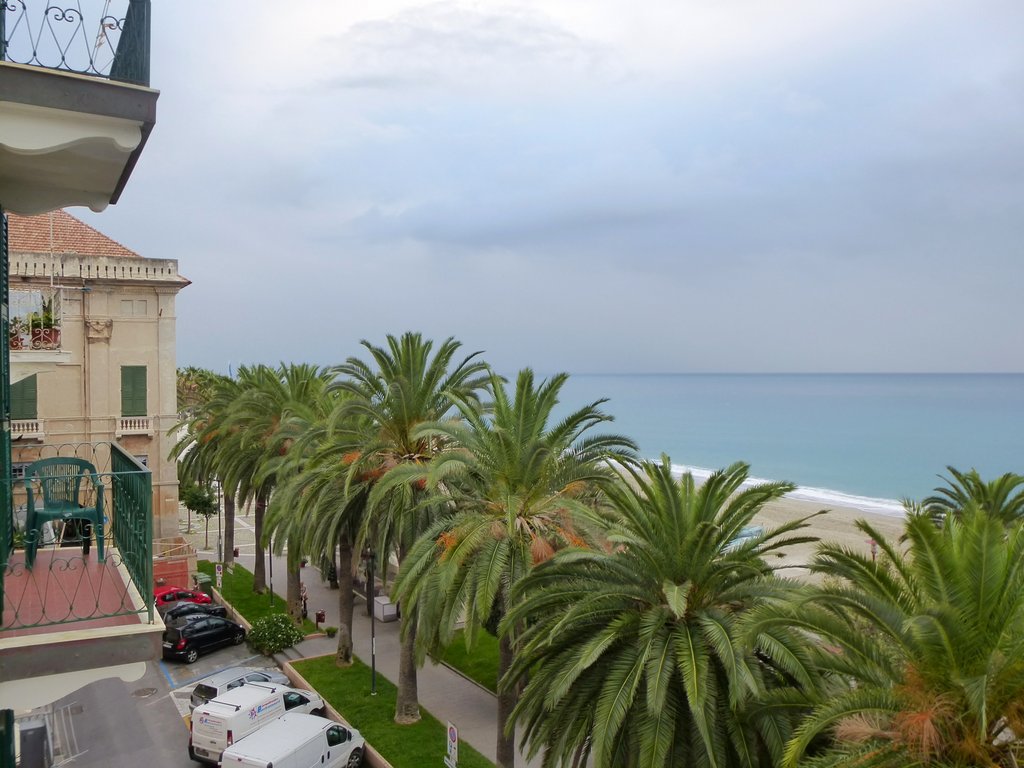 Its always so nice to be able to spend time in Italy on these trips, and soak up the Italian way of life for a short while. Paintings to follow at some later stage!